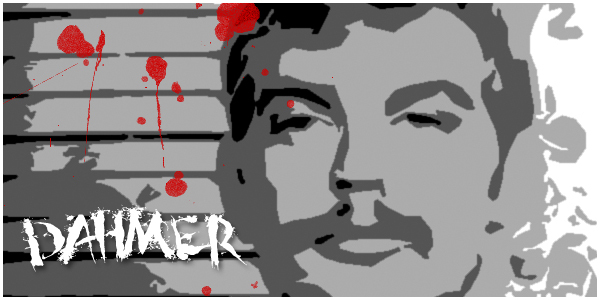 Milwaukee born in 1960, Jeffrey Dahmer moved to Ohio with his family at age six. In 1968 he was sexually molested by a neighbor boy in rural Bath Township. Unreported at the time, the childhood incident may play a pivotal role in understanding Dahmer's subsequent crimes; likewise, the ferocious arguments between his parents (later divorced) clearly demonstrated to Dahmer that home was no safe haven for a child.

By age 10, Dahmer was "experimenting with dead animals: decapitating rodents, bleaching chicken bones with acid, nailing a dog's carcass to a tree and mounting its head on a stake. In June 1978, days after his graduation from high school, Dahmer crossed the line from morbid "experimentation" to murder. He was living alone at the time, his parents having separated and fled, neither one thinking to take Jeff along. His victim was hitchhiker Steven Hicks, whom Dahmer took home for a drink and some laughs. When Hicks tried to leave, Dahmer crushed his skull with a barbell, strangled him to death, then dismembered and buried his corpse.

That first slaying shocked Jeffrey back to a semblance of normality. He took a brief shot at college, then signed up for a six-year term of military service, but the army discharged him after barely two years, fed up with his heavy drinking. (Later speculation on his possible link to several unsolved murders in Germany, committed while Dahmer was stationed there, produced no concrete evidence.) In 1982, he moved into his grandmother's house in West Allis, Wisconsin. That August, Dahmer logged an arrest for indecent exposure at the state fair. Identical charges were filed in September 1986 when two boys accused Dahmer of masturbating in public. Convicted of disorderly conduct in that case, he received a one-year suspended sentence with orders for counseling.

On September 15, 1987, Steven Tuomi vanished in Milwaukee, the mystery unsolved until Dahmer confessed to his murder in 1991. James Doxtator was the next to die, in January 1988, followed by Richard Guerrero on March 24. By September 1988, Jeffrey's odd hours and the stench of his "experiments" had become too much for his grandmother, and he was asked to move out. On September 25 he found an apartment on Milwaukee's North 25th Street.

The next day, Dahmer lured a Laotian boy to his flat, fondled him, and offered cash for a nude modeling session. Police were called, and Dahmer was charged with sexual assault. Convicted in January 1989, he remained free pending a formal sentencing scheduled for May. Meanwhile, on March 25, Dahmer slaughtered victim Anthony Sears.

Sentenced to one year in jail, Dahmer was released after serving 10 months. The death parade resumed with Edward Smith in June 1990. July's victim was Raymond Smith (no relation to Edward). Ernest Miller and David Thomas were butchered in September. Dahmer bagged Curtis Straughter in February 1991. Errol Lindsey joined the list in April, followed by Anthony Hughes in May.

By that time, Dahmer had conceived the bizarre notion of creating "zombies" who would be his live-in sex toys, obedient to his every whim. Instead of using voodoo, Jeffrey opted for a more direct approach, drilling holes in the selected victim's skull, then dribbling caustic liquids into the wounds in an effort to destroy the subject's conscious will. Needless to say, the weird approach to neurosurgery had a 100 percent failure rate, and none of Dahmer's favored "patients" survived.

One almost got away, however. Konerak Sinthasomphone was a brother of the youth Dahmer molested in 1988. Missing from home on May 16, 1991, he was next seen the following day - naked, dazed, and bleeding from head wounds - when neighbors reported his plight to Milwaukee police. Officers questioned Dahmer who described Konerak as his adult homosexual lover, and since Konerak spoke no English, they returned the youth to Dahmer's custody… and to his death. (When news of the blunder broke, following Dahmer's arrest on murder charges, the two patrolmen were briefly suspended from duty, then reinstated when they threatened civil suits against the city.)

The juggernaut rolled on: Matt Turned killed on June 30; Jeremiah Weinberger on July 7; Oliver Lacy on July 15; Joseph Brandehoft four days later. In addition to raping, murdering, and dismembering his victims, Dahmer also sampled cannibalism with at least one corpse, though he denied it was his common practice. Tracy Edwards was lucky, escaping from Dahmer's apartment on July 22 with handcuffs still dangling from one wrist. He flagged a squad car down and led police back to Dahmer's flat at the Oxford Apartments, where the dissected remains of 11 victims were found in acid vats and the refrigerator. In a touch reminiscent of another Wisconsin necrophile, Edward Gein, Dahmer had built a makeshift altar in his bedroom, decorated with candles and human skulls.

By August 22, 1991, Dahmer had been charged with 15 counts of murder. At his trial, beginning on January 30, 1992, Dahmer filed a plea of guilty but insane. Two weeks later, on February 15, jurors found him sane and responsible for his actions. The court imposed 15 consecutive life sentences, thus requiring Dahmer to serve a minimum of 936 years. (He was subsequently charged with the Hicks murder, in Ohio, but was never brought to trial.)

In prison, Dahmer refused offers of protective custody despite the many threats against his life. On July 3, 1994, another convict tried to slash his throat in the prison chapel, but Dahmer emerged from the incident with only minor scratches and refused to press charges. Five months later, on November 28, he was cleaning a bathroom adjacent to the prison gym when another member of the work detail, 25-year-old Christopher Scarver, grabbed an iron bar from a nearby exercise machine and smashed Dahmer's skull, killing him instantly. A second inmate, 37-year-old Jesse Anderson, was mortally wounded in the same attack, dying two days later. A racial motive was initially suspected in the murder since Scarver, like many of Dahmer's victims, was black, but a closer look determined that the killer was deranged, believing himself to be the "son of God," acting out his "father's" command. --Mike Fisher