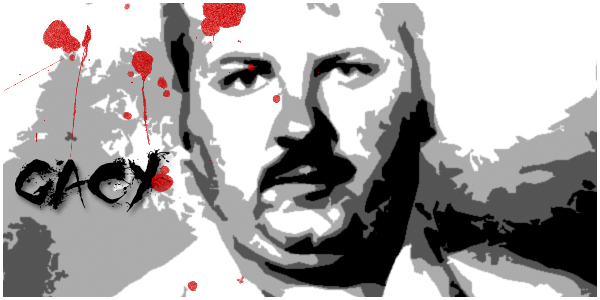 John Gacy, Sr., was an alcoholic tyrant in his home, a crude exaggeration of the famous "Archie Bunker" character with every trace of humor wiped away. He took no pains to hide his disappointment with the son who bore his name, inflicting brutal beatings for the least offense, occasionally picking up the boy and hurling him across the room. In more pacific moments, he was satisfied to damn John, Jr., as a "sissy" who was "dumb and stupid," useless in the scheme of things. In time, the "sissy" portion of his groundless accusations would appear to be a self-fulfilling prophecy.

Chicago born in March 1942, Gacy grew up doubting his own masculinity, taking refuge from sports and other "manly" activities through precocious hypochondria. Struck on the head by a swing at age eleven, he suffered periodic blackouts for the next five years until their cause - a blood clot on his brain - was finally dissolved with medication. Deprived of one affliction, he developed - or imagined - another, settling on the symptoms of a heart ailment that seemed to come and go, depending on his mood.

After graduation from business college, Gacy became a shoe salesman, but he had his sights on better things. He married a coworker, whose parents owned a fried chicken restaurant in Waterloo, Iowa, and Gacy stepped into a ready-made role as the restaurant's manager. He was a whiz kid on the job, belying everything his father had to say about his intellect and drive, ascending to a post of admiration and respect among the local Jaycees. His wife and friends were absolutely unprepared for John's arrest, in May of 1968, on charges of coercing a young employee into homosexual acts spanning a period of months. Those accusations were still pending when Gacy hired a teenage thug to beat the prosecution's witness, and more charges were filed. Striking a bargain, Gacy pled guilty to sodomy, and the other felony counts were dismissed. Sentenced to ten years in prison, he proved himself a "model prisoner" and was released in eighteen months.

With the state's permission, Gacy moved back to Chicago, where he established himself as a successful building contractor. Divorced while in prison, he soon remarried, settling in a middle-class neighborhood where he was popular with his neighbors, the host of elaborate holiday theme parties. On the side, he was active in Democratic politics - once posing for photos with the wife of President Jimmy Carter - and as "Pogo the Clown," performing in full makeup at children's parties and charity benefits. Few of his new acquaintances knew anything about the Iowa arrest, and those who heard a rumor were assured that John had merely done some time for "dealing in a little porn."

On February 12, 1971, Gacy was charged with disorderly conduct in Chicago, on the complaint of a boy he attempted to rape. The accuser, a known homosexual, failed to appear in court for Gacy's hearing, and the charges were dismissed. Parole officers in Iowa were never notified of the arrest or accusation, and Gacy was formally discharged from parole on October 18, 1971.

By his own estimate, the first murder occurred less than three months later, on January3, 1972. The victim, picked up at a bus terminal, remains unidentified, but his death was typical of Gacy's future approach. In searching for prey, Gacy sometimes fell back on young friends and employees, more often trolling the streets of Chicago for hustlers and runaways. Like the Hillside Strangler, he would sometimes flash a badge and gun, "arresting" his intended victim. Others were invited to the Gacy home for drinks, a game of pool, and John would show them "tricks" with "magic handcuffs," later hauling out the dildo and garrote. When he was finished, John would do the "rope trick" - strangulation - and his victim would be buried in a crawlspace underneath the house. In later years, as he ran out of space downstairs, he started dumping bodies in a nearby river.

Planting corpses in the crawlspace had its drawbacks, notably a rank, pervasive odor that the killer blamed on "sewer problems." Gacy's second wife was also in the way, her presence limiting his playtime to occasions when she left the house or traveled out of town, but when their marriage fell apart, in 1976, Gacy was able to accelerate his program of annihilation. Between April 6, and June 13, 1976, at least five boys were slaughtered at Gacy's home, and there seemed to be no end in sight. On October 25 of that year, he killed two victims at once, dumping their bodies into a common grave. As time went on, his targets ranged in age from nine to twenty, covering the social spectrum from middle-class teens to jailbirds and prostitutes.

Not all of Gacy's victims died. In December 1977, Robert Donnelly was abducted at gunpoint, tortured and sodomized with a dildo in Gacy's house of horror, then released. Three months later, 26-year-old Jeffrey Rignall has having a drink at Gacy's home when he was chloroformed and fastened to "the rack," a homemade torture device similar to one used by Dean Corll in Houston. Gacy spent several hours raping and whipping Rignall, applying the chloroform with such frequency that Rignall's liver suffered permanent damage. Regaining consciousness beside a lake in Lincoln Park, Rignall called police at once, but it was mid-July before they got around to charging Gacy with a misdemeanor. The case was still dragging on five months later, when Gacy was picked up on charges of multiple murder.

On December 12, 1978, Robert Piest disappeared from his job at a Chicago pharmacy. Gacy's construction firm had lately remodeled the store, and Piest had been offered a job with the crew, informing coworkers of his intention to meet "a contractor" on the night of his disappearance. Police dropped by to question Gacy at his home, and they immediately recognized the odor emanating from his crawlspace. Before they finished digging, Gacy's lot would yield 28 bodies, with five more recovered from rivers nearby. Of the 33 victims, nine would remain forever unidentified.

In custody, Gacy tried to blame his murderous activities on "Jack," an alter-ego (and coincidentally, the alias he used when posing as a cop). Psychiatrists dismissed the ruse, and the defendant was convicted on all counts at his 1980 murder trial. Life sentences were handed down on 21 counts of murder, covering deaths that occurred before June 21, 1977, when Illinois reinstated capital punishment. In the case of twelve victims murdered between July 1977 and December 1978, Gacy was sentenced to die. After fourteen years on death row, the "killer Clown" was finally executed by lethal injection in 1992. --Mark Fisher